I’m in a unique situation where getting married will actually benefit me in terms of tax returns. Typically, when two people get married, they will have to pay a small marriage tax fee when they file jointly, mainly because of dual income status. But for me, my fiancee is a student and currently has zero income. When we get married early next year, I’ll be the sole source of income so there will be some tax benefit for both of us when we file jointly. Whether we get married in January or June or December, it does not matter because the benefit will kick in for the entire calendar year for the year we are married. Since we are deciding to get married in 2011, we’ll only see tax benefits for 2011 and so on, provided that she does not work full time. If, however, we decide to push the wedding forward and get married in December 2010, we’ll take advantage of the tax benefit for the entire 2010. So, with that said, how much is the tax benefit and is it worth the effort of getting married early? 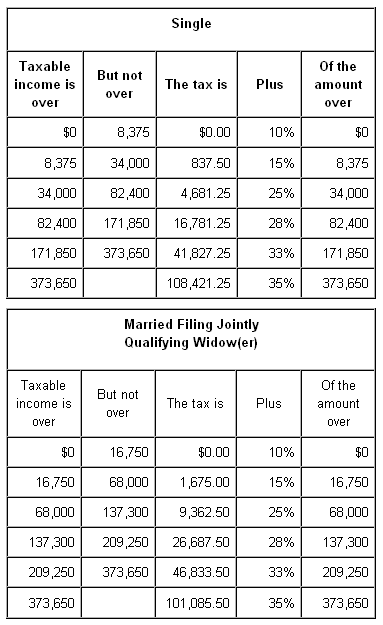 Now, if I were to remain single this year by getting married next year, I will be in the 25% tax bracket as a single person and be required to pay $5,325. So, by marrying this year, I’ll save $676. For my income bracket, there is no tax benefit in the state of Maryland. I don’t think $676 is high enough for us to go through all the trouble of trying to marry early. However, what we can do is get married in the courthouse, legally, in December and then have the normal wedding ceremony at the regular scheduled time frame. $676 is low, but I’m looking for any possible way to save money and to meet wedding budget. For some others, it might be enough to give it a consideration. When I first performed this calculation, I used gross income and thought I would save over $4,000.

If you’re not happy with these tax rates, perhaps you can research which nations have the lowest tax rates by country. But soon, I think you’ll realize that we actually don’t have it that bad compared to other countries with higher tax rates.