Sometimes, no matter how good your defensive driving skills are, you will be involved in an accident and there’s nothing you could’ve done differently to avoid it.  My future cousin in-law, Jon unfortunately was involved in a serious accident this past weekend when a drunk teenage driver drove in the opposite lane of the highway and crashed head-on with him. He was simply at the wrong place at the wrong time. Jon’s going to be at the hospital at least for the next 6 weeks recovering. I’m going to continue to pray for a speedy full recovery.

Accidents such as Jon’s are unfortunate and you hope you will never have to be in those situations. However, there are ways to avoid certain accidents if your defensive driving skills are intact. Here are my Top 12 Defensive Driving habits I try to practice every time I’m on the road. 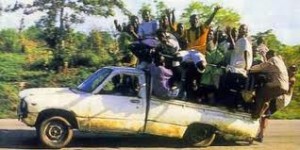 So there you have it. These are my top twelve ways to improve your defensive driving skills. Remember, just because you believe you’re a good driver doesn’t mean that you’re a safe driver. Although you may not be doing anything that violates any traffic law, if you’re not careful, you could be putting other drivers in danger.